We asked players what they’d like to change about Clan Wars 2. Here are the results. 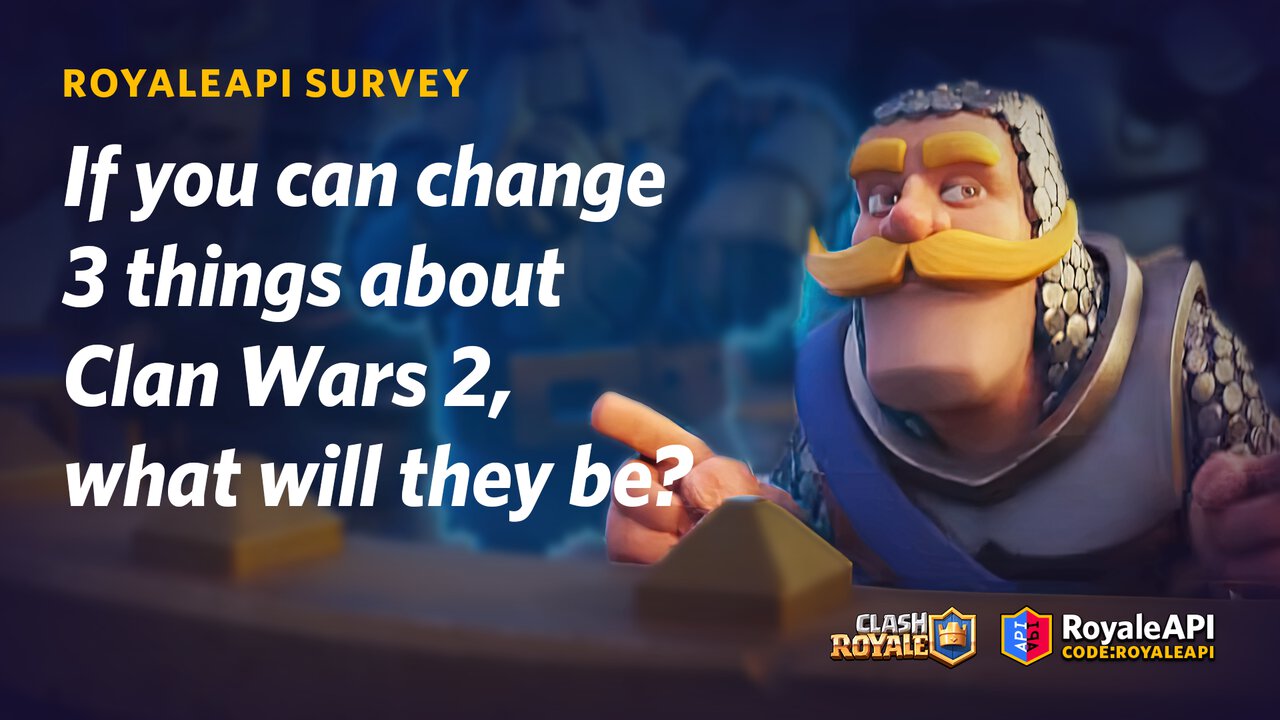 We’ve asked players on Twitter to name the top 3 changes they would like to see for Clan Wars 2 and received 40 replies. Here’s a summary of those responses.

If you can change 3 things about Clan Wars 2, what will they be? — @RoyaleAPI

This is the number one most-requested item, with 13 users (33%) asking for it.

Right now, players play war battles using levels in their card collections. Most users would prefer to play these battles in tournament-standard (Level 9) instead. As an alternative, players would like to see level caps implemented depending on war leagues.

Our Opinion. We think that the system was implemented this way to encourage players to upgrade their cards. We would like to offer an alternative solution: allow battles be played in tournament standard but calculate fame based on card levels. This way, battles will always be played under fair conditions, but players will still have incentives to upgrade their cards in order to help their clan finish the River Race faster.

Right now, you face the same clans every week for the entire season. As most have observed after several seasons, the ranking looks exactly the same every week. What players would like to see is have different clans compete on each week instead.

Alternative Solution. As an alternative, we like an idea suggested by Rich Slaton, which is to allow the first 2 weeks become “seeding rounds” and allow week 3-4 to become a competitive rounds that has more weights.

What users wish to see is an option to allow players to opt-in/out while not hurting clan progress. Going hand-in-hand with this request is the request to allow clans set their “war sizes” (10-25-50) and have clan boats hit points / repair points be adjusted to reflect the relative size of participation.

A common consensus among users is that boats take too long to damage. Often, the race is over before you can sink a boat. At the same time, if your boat did get damaged, it takes too long to repair it.

Our opinions. Agreed! In the rare occasions that our clans have had boat battles, those wars were really run. However, it takes too long to damage boats right now, so much so that it is often too high of a risk to attack. If boats can have less HP (for both attack and damages), the boat battles could have a huge impact in clan war strategy.

Here are other requests that are less popular, but deserve a voice here — they were included in “top 3 wish lists” after all.

Thank you for everyone who has participated in this survey. We have forwarded your collected responses to the Clash Royale team and hope that they will consider your ideas.

Got something to add? Join the discussion on RoyaleAPI Discuss.